What You Missed at AWS Public Sector Summit: Swag, Tech, and Life on Mars First off, if you don’t have a Data Dogs t-shirt or CloudCheckr sticker on your laptop – it’s not officially an AWS Summit. The swag is as everywhere as usual, and this year AWS set up an area with arcade and old school video games, bean bag chairs, a pool table, and giant versions of your favorite childhood games (I made have played giant connect 4 a few times). While we were also in attendance at the San Francisco summit (where everyone claims to be a start-up), the Public Sector summit understandably had a few more suits and ties walking around the audience, and less of the Start-up booths that made San Francisco summit an event that was extremely personalize for a small business consulting group and AWS partner like us.

What Was the Focus?

The Public Sector summit circled around the long federal questions of migrating from an on-prem (premises) environment running SQL, VMware, Oracle, or other legacy devices and the costs associated, labors, and capability of running them on the AWS GovCloud. ATO (Authority to Operate) was a common question surrounding just about every booth, pop-up session, and working group, as federal contractors, employees, and interested members of the Federal, State, and local governments took notes on what to include in their upcoming RFPs, RFIs, and RFQs (as well as other acronyms we might be leaving out).

While San Francisco focused around the release of Deep Lense, the Public Sector show cased more use cases and success stories that validated the AWS cloud, VPCs and GovCloud as a reliable and SAFE option for the Public Sector.

Features and Our Host 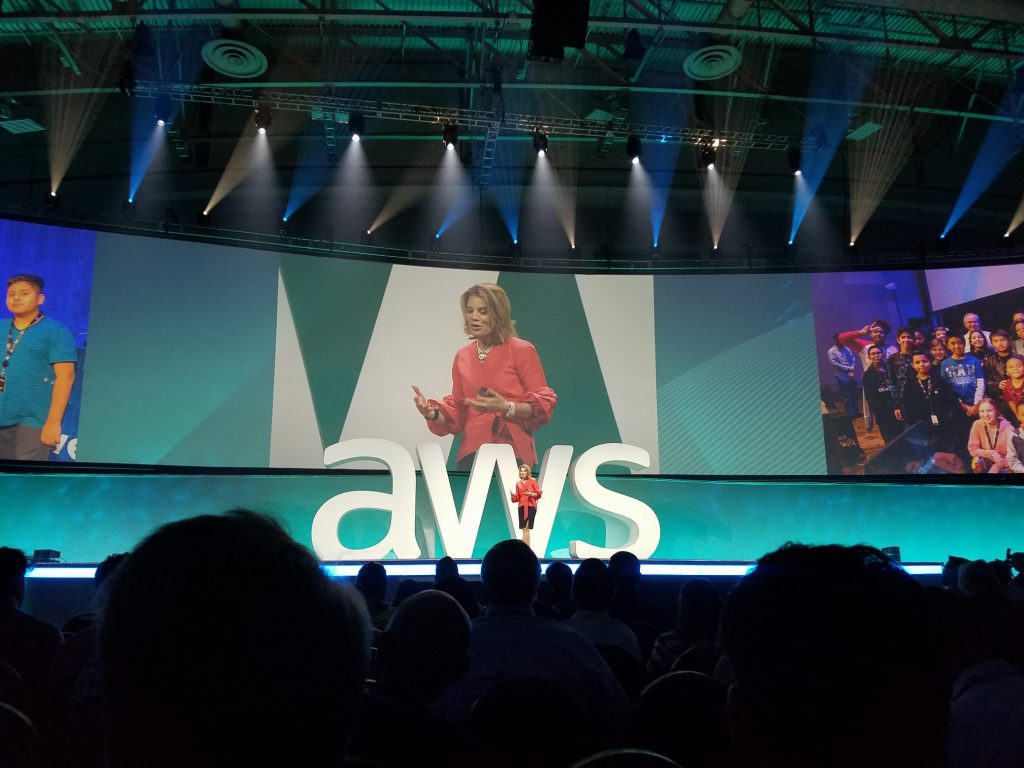 Our host for the two-day summit was Teresa Carlson, who is the founder and leader of Amazon Web Services (AWS) Worldwide Public Sector, and one of the most accomplished and forwarding-thinking technology leaders in the world today. She was the keynote speaker and host, and hosted a Fireside chat session in the Executive Members area (which we too were in attendance for – apparently only Purple badges were allowed for this area and we had some of our closest AWS friends impressed that we we’re allowed into the secret area of the DC higher ups).

Carlson founded the AWS Worldwide Public Sector in 2010, and since then has driven the business’ growth from what she called a small 3 person team, to now a global leader in the Public sector. her knowledge and expertise rang through in the multiple stages she spoke on (as she seemingly was running from room to room, possibly teleporting?), and she pushed hard on the agenda (that is close to the hearts of Capitol Presence) of getting a higher number of women and minorities into the tech industry, especially in leadership positions. She was playing well as the politician in this role, going so much as to shake our Vice President’s hand (he’s Peruvian, and admittingly stood out after she spoke circled around the stage), while his hands were full. While the pinky shake was a bit awkward – it did not seem as a stretch like a politician seeking for a baby to kiss, more so of someone passionate for her mission that she had rang clear to a less than diverse room a few moments before.

Yes, They Let Us in the Executive Lounge 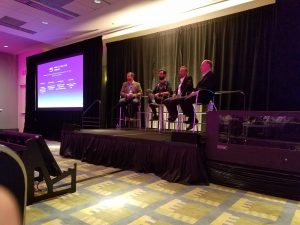 In all, our company was awarded three, yes three, purple executive badges which allows 3 of our 4 board members in attendance the privilege to attend fireside chats, one-on-one marketing and discussions with Federal Decision makers and technical thought-leaders, and gave us the opportunity to as an open forum question on “how to obtain a greater user buy-in within your agency or any federal agency when adopting, developing, or forward thinking on new cloud solutions”. Teresa Carlson, Max Peterson, and many others lead an Q&A panel discussion of both Federal Customers and tech leaders, as well as AWS leaders and experts to help answer questions on user and agency buy in, how AWS has helped their agency, as well as new advances and ways AWS can help both contracting agencies as well as Government agencies with some of the road blocks, red tape, and necessary compliance surrounding the Public Sector.

These discussions were the highlight of the two-day event for us, and the steak and quinoa weren’t too shabby either.

Why Wasn’t There More Twitch?

In San Francisco we experienced and overload on Twitch shows, interviews, broadcasts, and interactive video that gave us at Capitol Presence a new appreciation for Twitch and what it can do as a news and information outlet. We left California a few months back knowing that we wanted to implement a great Twitch presence and broadcast our events over the AWS tool. In Washington, DC, however, there was less Twitch involvement and broadcasting of interactive shows seemed like less of a focus, however you heard many calling the event the “re:Invent of the Public Sector”, parts of the event lacked that Twitch and broadcast feel that AWS nailed just a few months before at San Francisco Summit. With that said, there were videos and interviews that were broadcast via Twitch and by AWS, and the below is one of our favorite from the two-day summit.

Our Favorites: Swag, Tech, and Life on Mars

With every Summit comes a backpack full of swag, new tech ideas and experiments, and some cool moments that have us talking for the coming weeks. This Public Sector was no exception. While San Francisco left us amazed at how Peloton has transformed the cycling community, Public Sector hit a lot closer to home for us.

Okay, so we will start here. While our kids loved the foam rockets given out, our favorites of the week were our CloudCheckr T-shirts. I know, I know – T-shirts how boring. But we LOVE Cloud Checkr, and use them in our environments. If you are a customer of ours, Cloud Checkr is running on your AWS environment and keeping you safe, compliant, and informed on all that is going on. For this reason that baby blue T-shirt was a favorite of the take homes this Summit. Other favorites included the GitHub character stickers (yes now just about anyone involved in Capitol Presence has a GitHub sticker on their laptop), as well as the cell phone car holder that was given out by Cohesity.

While stickers of Bootcamps are always a big want from the Summits, our favorite take homes (and what I’m wearing at the moment of writing this) were given out by CloudStart. CloudStart gave out a great T-Shirt for members of our team, as well as a cell phone stand, finger hold, and credit-card slot. I don’t know the official name of them are, but there is a black AWS one on the back of my phone as we speak.

By far this is the easiest of all of these, as it comes from Mr. Taylor Carol and the team over at GameChanger Charity. Despite missing nearly five years of school as a child with a then-terminal cancer diagnosis, Mr. Carol, now a 23-year old Harvard Graduate, has taken GameChanger Charity from a garage hobby to an international endeavor. It now partners with the largest tech companies on earth, like Amazon, to support over 20,000 children in 100 hospitals around the world. Taylor Carol witnessed the immense impact that video games and entertainment technology had on patients’ lives. Inspired, he resolved to build a nonprofit committed to leveraging gaming, technology, and innovation to empower patients to play, learn, and socialize.

At Capitol Presence this hits so close to home. I (Roy) was diagnosed with Crohn’s disease at age 12. While not terminal, it has left me spending more time than I would like in a hospital at times and many of the focus and work that GameChanger is doing made me emotional when listening. For a young child in a hospital, the 3 Disney movies on file don’t help with the fear, anxiety of a pending diagnosis, and constant mind wondering. This technology delivers real world experiences to someone who may not ever leave a hospital bed again, and for this GameChanger was by far and away our favorite tech from the week (plus we got the privilege to have a one-on-one discussion with Taylor and his team in the executive member area where we let him know how amazing his company was, while talking about how good the éclair bites were).

While we are still learning about IoT and how we can use it here at Capitol Presence, our favorite take away comes from the Raspberry-Pi and GreenGrass capabilities. We spent nearly 2 hours over the two-day period speaking with members of the AWS team on the readily available tech surrounding IoT and GreenGrass and how it can be utilized to deliver AWS cloud functionality without wi-fi, to an on location device for processing of data at real time. This is truly the future of cloud technology, and one we are extremely excited about working with.

Let’s All Go to Mars

One of our favorite featured sessions was “Innovation on the Edge: How Rapid Experimentation with Technology is Achieving Results in the Enterprise | With NASA JP”. We learned how JPL — an 80-year old self proclaimed startup — is rapidly experimenting with AWS, Cloud, and IoT technologies to address the challenges of Space exploration. Yes, Space exploration, as in looking for water on Mars, tracking the wind storms currently going on on the Red planet, and the possibility of water on one of Jupiter’s moons. What else is awesome about the tech they are using? They’ve created VR and AR portals where you can view and walk on Mars surface just like Matt Damon!

AWS always puts on a great show and knows how to deliver a product (Customer Obsession, am I right?), not to mention the amazing available tech through the AWS MarketPlace and plethora of applications within the AWS solutions network. We are a proud AWS partner and have spent the last 4 days (yes we were in attendance at pre-Summit bootcamps, which we HIGHLY recommend, and attended the Widows on AWS workshop on the Friday after summit with Elias and Lisa’s team – Who we LOVE) diving further into the AWS world and make up, only to rise even more excited about the technology and cloud offerings from Amazon Web Services. We believe this opened the eyes of many of those in the Public sector who still believe the cloud to be an unknown or lacking security – as “Priority Zero” was made very clear that Security and compliance is often times better in the AWS Cloud. For more information view the AWS Public Sector Summit website or simply reach out to us to discuss Public and Private sector technologies. Use apps in your meetings from Microsoft Teams mobile today

With the realities of hybrid work in front of us, we’ll be navigating through new experiences where we’ll need to accommodate the needs of workers New options help you carve out downtime between meetings. For many, back-to-back video meetings are a hallmark of the pandemic era. One conversation ends, another

Five things to know about apps in Microsoft Teams

Apps let you do more in Teams. Think about the tools, files, and dashboards your org already uses. Many of them can be added right

Intelligent Solutions for a Modern Government and War Fighter